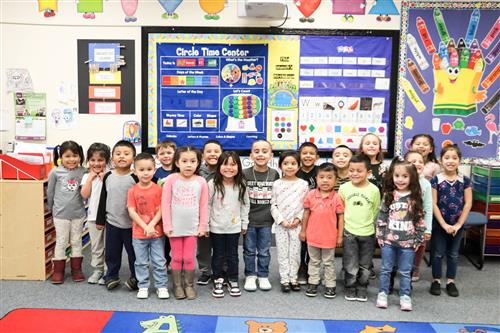 Othello’s earliest learners are making tremendous gains in the preschool programs in our district. Increased enrollment, incredible growth in assessment scores, and a driven focus by staff and parents in kindergarten readiness are evidence of the commitment by Othello’s Early Learning Department, to achieve its goal to ensure all Othello preschool children are prepared and ready to succeed when they enter Kindergarten.

In addition to increased enrollment in Othello’s preschools, the significant gains in assessment scores are another indicator of the progress being made in early learning efforts. Washington conducts a Kindergarten Readiness Assessment (worth a total of 91 points) that assesses students on a variety of areas, including colors, shapes, letter names, letter sounds, number recognition 1-10, counting, name writing, knowledge of name and birthdate, and pencil grip.  The assessment was given to Othello School District’s preschoolers in August 2017, and then again last month in February 2018 – and the progress made by students was incredible!

The incredible growth by preschool students as measured by the assessment tool is also evident in the efforts made by the OSD staff and their parents in Othello.  Numerous kindergarten readiness events, parent and staff trainings, and partnerships are highlighting the recognition that parents and caregivers are the best and most influential teachers for children in their first five years.  The OSD Early Learning Department has conducted various staff trainings through the “Kinder Fellows” program, as well as developmentally appropriate kindergarten practice workshops and classroom site visits.  Othello parents are also actively engaged in early learning efforts.  Free READY! for Kindergarten parent classes were conducted during the fall, winter, and spring, with 125 families participating this past winter. The newly-developed LEARN Academy is another early learning partnership between Othello schools and its families to advocate and provide resources for each child. Both the READY! and LEARN classes are offered in English and Spanish for Othello parents and caregivers.

Learning in Othello begins long before students enter our kindergarten classrooms, and our Early Learning Department is dedicated to equipping our community’s families with the tools they need to help their children during their earliest years. We invite and encourage all families to join in these efforts to prepare students for success in school by reaching out to our Early Learning Department at the Othello School District.